Born in Tupelo, Mississippi, Elvis Aron Presley (January 8, 1935-August 16, 1977) moved to Memphis, Tennessee with his family when he was 13  and began reinventing himself. Presley’s slicked back hair, long sideburns, and suggestive dance moves, combined with a musical style that borrowed from rhythm and blues, country, pop, and both black and white gospel transformed him into a cultural and musical icon and put rock ‘n’ roll in the international spotlight. Presley began his recording career at Sun Records, and later signed with RCA. In 1955, he starred in Love Me Tender, and after his military service ended in 1960 devoted much of his energy to his acting career. In 1957, Presley purchased Graceland in Tennessee, the classical revival mansion that would become inextricably linked with his life and legacy. Presley’s career declined after 1965, but a 1968 television special sparked a return to his blues roots and a tour that featured all the vitality of his 1950’s performances. By 1973 however, personal difficulties, health problems, and drug use took a significant toll on the King of Rock ‘n’ Roll. He died of heart failure and complications from drug use at Graceland in 1977. 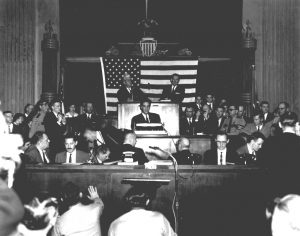 Elvis Presley with Governor Buford Ellington at a joint meeting of the Tennessee General Assembly in 1961.