The Tennessee Historical Society’s collection includes a number of flags, including the original state flag designed by Lee Roy (LeRoy) Reeves of Johnson City in 1905. This is the current design of the state flag and features three stars (one for each Grand Division) bound indissolubly together in a circle of blue with a rim of white on a red field bordered by an edge of white and a bar of blue. The stars are purposefully off center so that no Grand Division is superior to another, but all are equal. By law, the highest star is to be displayed to the upper confined corner of the flag. Reeves added the blue and white trim as a design element so that the flag would show all three colors when hanging limp.  Reeves was captain of the Third Regiment of the Tennessee Infantry of the National Guard and presented the flag to the THS for its preservation into the future. 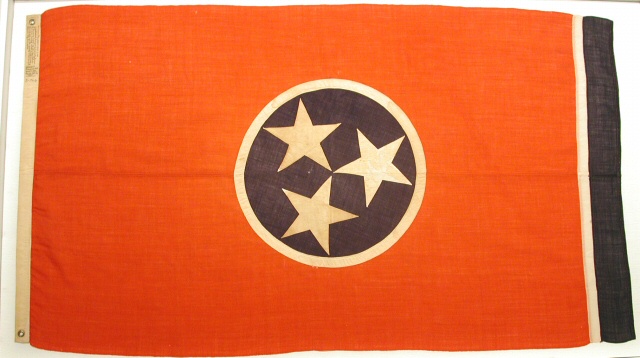