The Tennessee Historical Society’s collections originated in 1818 when artist Ralph E.W. Earl founded the Nashville Museum. The museum exhibited oddities like the 14’ long jaw of a sawfish, but Earl’s portraits drew in the crowds. A highlight of the museum, Earl’s 1818 full-length portrait of General Andrew Jackson showed Old Hickory “reconnoitering the position of the British before New Orleans” before the battle on January 8, 1815. 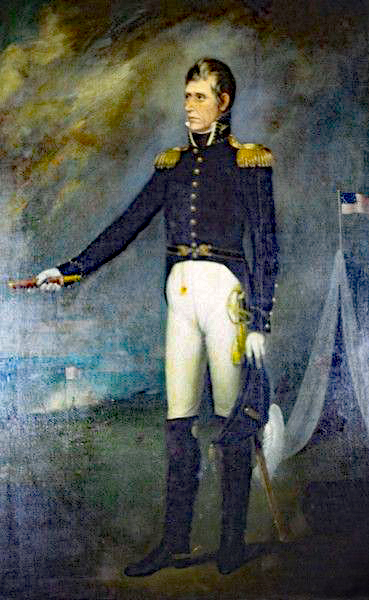 “In the contour of the head, and indeed of the whole figure, the fidelity of the representation cannot easily be excelled…. There is a characteristic in the forehead of the original [Jackson himself], which is rarely met with – there is a stubbornness, or perhaps more properly speaking, a firmness almost amounting to obstinacy, which the Painter has unequivocally struck. The expression of the eye, indicates a perfect confidence, as to the result of the contest which seems to be viewed with a fixed and determined resolution to overcome.”

The portrait came into the possession of the Tennessee Historical Society in 1865 as a bequest from Justice John Catron, and it is now part of the THS collections in the Tennessee State Museum.