One of the Tennessee Historical Society’s most famous and popular items is our mummy, which is on display at the Tennessee State Museum. Nashville, Tennessee is pretty far from Egypt, so why does the THS own a mummy?

The short answer is that in December 1859, a THS member and US Navy purser, Jeremiah George Harris donated it to us. Harris obtained the mummy while in Cairo with the Navy, and according to one historian, the THS mummy was actually one of a bundle of six Harris received. Harris opened the package in New York and chose the best of the lot for the Tennessee Historical Society, since “nearly all our historical societies have one.” In 1861, John Williams sent the THS another mummy, though it never arrived from New Orleans, likely due to the Civil War. Also in 1861, George W. Elliott gave the THS an embalmed cat from Thebes (on display with the mummy), as well as  “five vials, containing water from Dead Sea, Pool of Siloam, Fountain of Elisha, River Jordan, the Nile.”

The THS enthusiastically received these donations, which were as interesting to people then as they are now (though the cat was always more interesting than the river water!). The “Egyptomania” craze took off at the  turn of the 19th century when Napoleon invaded Egypt and has remained strong, as evidenced by the Egyptian-revival Downtown Presbyterian Church in Nashville (1849) and the Egyptian-revival Ballard & Ballard building in Memphis (1924). The THS, like most other historical societies at the time, collected oddities and objects of interest that might be of interest to members or invited guests, rather than objects that were strictly associated with state history. The mummy remains a popular item, and a reminder of a different time in Tennessee Historical Society history. 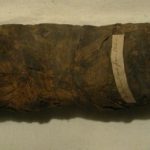 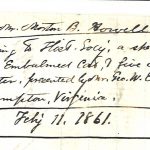